Bethlehem, the city of King David

“But you, bethlehem-ephrathah too small to be among the clans of judah, from you shall come forth for me one who is to be ruler in israel; whose origin is from of old, from ancient times. He shall stand firm and shepherd his flock by the strength of the lord, in the majestic name of the lord, his god; and they shall remain, for now his greatness shall reach to the ends of the earth” (micah 5: 2-4)

The land of Jesus

Bethlehem is situated on two rocky hills of over 777 meters above sea level, near the Desert of Judea, to the south of Jerusalem. Its hebrew name “Bethlehem” means “the house of the bread”.

1. As told in the Old Testament, it was referred to as the city in which will surge thebirthplace of King David,chosen by God and foretold by the prophet Samuel.

2. It was also referred to the city from where the Messiah would come, in fulfillment of the prophecies – where later Jesus would be born.

“But you, Bethlehem-Ephrathah too small to be among the clans of Judah, From you shall come forth for me one who is to be ruler in Israel; Whose origin is from of old, from ancient times. He shall stand firm and shepherd his flock by the strength of the Lord, in the majestic name of the Lord, his God; And they shall remain, for now his greatness shall reach to the ends of the earth” (Micah 5: 2-4) 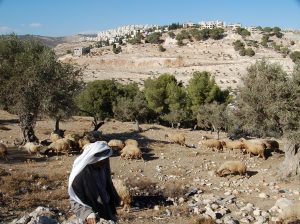 Saint Matthew (2:1) and Saint Luke (2:1-20) speak of the birth of Jesus in Bethlehem, during the times of King Herod, under the empire of Caesar Augustus. According to the accounts, it took place in a manger “because there was no place for them in the inn.” Theprotogospel of Saint James states that it took place in a cave. This was confirmed in Saint Justin’s account, in the middle of the second century.

The early Christians have always venerated the place where Jesus was born. In 135, Emperor Hadrian ordered the construction of a temple and a forest on top of the site of the grotto after having thwarted a revolution mounted by the Jews against the Romans. He dedicated this temple to the pagan god Adonis.

The grotto then all covered with trees was later discovered by Saint Cyril of Jerusalem in 348. Saint Jerome wrote in 395: “Over Bethlehem, the grove of Tammuz, that is of Adonis, was casting its shadow! And in the grotto where formerly the infant Jesus cried, the lover of Venus was being mourned.”

Earlier in the second century, Origen of Alexandria had written: “In regards to the birth of Jesus in Bethlehem, if anyone, after studying Micah’s prophecy and the history recorded in the sacred writings by the disciples of Jesus. If needing to have additional sources of evidence, Let him be aware that the Scriptures are confirmed and the Gospel involving his birth, for there can be seen the cave located in Bethlehem where He was born and the manger where. 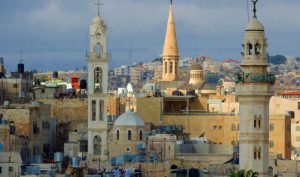 He was wrapped in swaddling-clothes. And this site is talked about with great interest in all the surrounding countries. Even among the enemies our faith it is being said that in this cave Jesus was born, the One who is worshiped and revered by the Christians.”

Later in 326, the emperor Constantine, influenced by his mother Saint Helen, ordered the construction of the Church of the Nativity on top of the grotto where Jesus was born. In614, when Bethlehem was attacked by the Persians, the church constructed by Justinianwas spared miraculously – something that was attributed to a mosaic which represented the Magi dressed in magnificent Persian attire.

In 1099, Tancred was sent by Godfrey of Bouillon to protect the city from Moslem invasions.A year later, on Christmas night of 1100,Baldwin I was crowned King of Jerusalem. Between 1165-1169, the Crusades restored the Basilica, replacing the mosaic that lined the flooring of the church with enameled white marble which was later destroyed by the Turks in the 16th century. 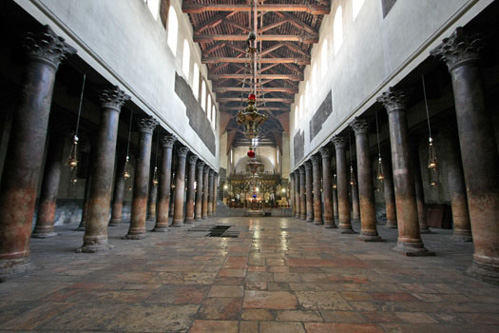 In 1347, the Grotto of the Nativity was entrusted to the care and custody of the Franciscans. Between 1645-1669, the Greek Orthodox were also granted rights to maintain the Basilica. Between 1810-1829, theArmenian Orthodox also had rights to the Basilica. Ever since, the Basilica was divided among the three churches.

The Basilica of the Nativity

Upon entering the Basilica of the Nativity from the Chapel of the Manger, one would feel as if he were in a different world.

This Basilica is the same one which was constructed by Justinian in 529. The central nave is flanked by 44 columns of pink limestone, arranged in four rows. The capitals, of white marble, are Corinthian in style and contain some mosaics that date back to the 12th century: for example, representations of the ancestors of Jesus and the first seven ecumenical councils. 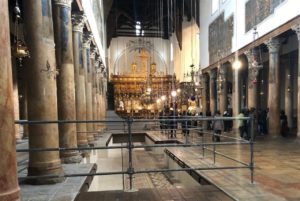 In the southern part of the nave, an ancient baptismal font used by the catechumens can still be observed. The actual roof of the Basilica was constructed in the 17th century and later renovated in 1842.

The Grotto of the Nativity

The grotto is the most sacred place in the Basilica. It is the place of the birth of Christ informed by tradition, situated below the Main Altar of the Basilica. The Chapel can be accessed through some worn out staircases that can be found on both sides of the choir.

The grotto is a very small chapel, almost rectangular in shape, with a small arc on its right side. In the grotto, there is an altar, and below, a star-shaped silver relic on white marble that mark the place of Jesus’ birth. The inscription says: “Hic de Virgine Maria Jesus Christus natus est” (Here Jesus Christ was born to the Virgin Mary). Above the altar, there are suspended silver lamps of oil which are lighted both day and night. 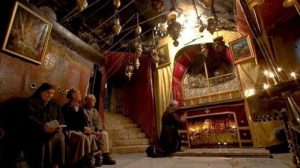 “In those days a decree went out from Caesar Augustus that the whole world should be enrolled. This was the first enrollment, when Quirinius was governor of Syria. So all went to be enrolled, each to his own town. And Joseph too went up from Galilee from the town of Nazareth to Judea, to thecity of David that is called Bethlehem, because he was of the house and family of David, to be enrolled with Mary, his betrothed, who was with child. 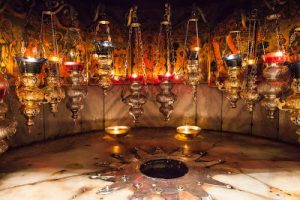 While they were there, the time came for her to have her child, and she gave birth to her firstborn son. She wrapped him in swaddling clothes and laid him in a manger, because there was no room for them in the inn.” (Luke 2:1-7). Manger is venerated in the small chapel located in front of the altar of the Nativity along with the Altar of the Magi on its side. In the grotto, the atmosphere is that of recollection and piety.