Skip to content
Home/Persecuted Church/Santiago, Chile – Catholics gather to pray and make reparation in a desecrated and ransacked church

Santiago, Chile – Catholics gather to pray and make reparation in a desecrated and ransacked church

“We must not allow our souls to be poisoned by this act”, says Father Pedro Narbona, the parish priest

Following the outrage of the sacrilegious attack on the parish church of the Assumption in the Chilean capital Santiago on Friday 8 November, the parish priest Father Pedro Narbona, gathered on Sunday together with his faithful to pray together and organise the cleaning of the church.

In an effort to console the Catholic faithful, some of whom could not hold back their tears, Father Pedro reminded them, “The Church is built not so much out of physical materials, but rather of the living stones, which we are, each and every one of us. We are the living stones and this is the fundamental truth.” At the same time he called on every person present “not to slip into the cycle of hatred that can only end up poisoning the souls”.

On Sunday the parish celebrated a simple ceremony of atonement, in which the faithful were able to kiss the damaged and desecrated crucifix and sing hymns to the Virgin Mary, to whom the month of November is dedicated in Chile.

The church had been attacked as part of the violent protests and demonstrations that have convulsed the country by hooded vandals who dragged out the benches, statues and sacred images into the street, smashing them and setting fire to them. They also sprayed graffiti and other abusive slogans on the inside walls of the church.

This is not the first time that a Catholic Church has been attacked. Father Pedro Narbona, who happens also to be the ecclesiastical assistant to the national branch of the international Catholic pastoral charity and pontifical foundation ACN International in Chile, reported that protesters had already attempted to set fire to the church on the previous Friday, 1 November, but he had managed to call the fire brigade in time. A week earlier, the facade of another parish church served by Father Pedro had also been attacked and damaged. This was the church of Vera Cruz, the True Cross, in the centre of Santiago. Outside the capital, there have likewise been two consecutive attacks on the cathedral in Valparaiso, at the end of October, plus another on the parish of Saint Teresa of the Andes in Villa Alfredo Lorca, in Punta Arenas. 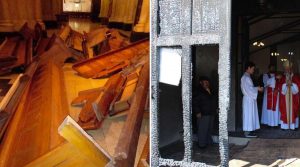 “We are deeply concerned and unhappy at the turn the violence has taken in recent days, even affecting the Church. We have witnessed a new act of desecration against a Catholic parish, which is all the more painful to us in ACN, as a Catholic pastoral foundation”, commented Maria Covarrubias, the president of the Chilean national office of ACN International. 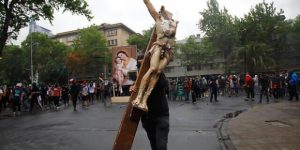 “We ask your prayers at this difficult time for our ecclesiastical assistant and his parishioners, for peace in our country and that God may convert the hearts of those who have committed these lamentable acts”, added Mrs Covarrubias, in an appeal to all the benefactors of ACN around the world.

In a video published on the You Tube channel of the archdiocese, the apostolic administrator of Santiago de Chile, Archbishop Celestino Aós, likewise expressed his solidarity with Father Narbona and his condemnation of the desecration of the parish church of the Assumption. “To you, dear Father and to all your Catholic faithful in the parish of the Assumption I wish to express our closeness and solidarity in your suffering. To all of you, dear brothers and sisters in the Faith, I repeat the words of the Apostle: do not allow yourselves to be overcome by evil, but conquer evil with good.”

At the same time he issued an appeal for peace: “With all the strength of our voice, we appeal to all our fellow countrymen and countrywomen to put a stop to all the violence. May those who are deceived into believing in the apparent effectiveness and triumph of violence instead adopt the path of dialogue and engage in the search for solutions to the problems, by putting forward their own visions.”

Aid the Church in Need