A day in the life of the Virgin Mary

Saint Luke says in his gospel that the angel Gabriel was sent by God to Nazareth, to a virgin named Mary, to announce to her that she was going to be the mother of the Messiah for which the Jews had been waiting; the Savior.

About two thousand years ago in Nazareth was an unknown village by almost all the inhabitants on the Earth. In this moment Imperial Rome shined with splendor. There had been many prosperous cities along the coast of the Mediterranean. The bustle of the merchants and the sailors flooded the streets and plazas of the city’s port. However, Nazareth was a handful of poor houses built against the promontories of large hills in Lower Galilee. Overall the region was of little importance. 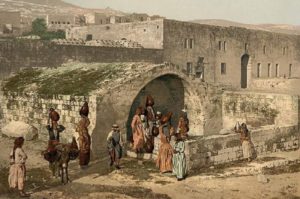 In a bit more than two walking they could arrive are the city of Seforis (in English?), where the majority of the commercial activity of the zone was concentrated. It was a prosperous city, with elaborate constructions and a high level of culture. The inhabitants spoke Greek and had good relations with the Greco-Latin intellectual world. In change, in Nazareth there lived a few Jewish families that spoke Aramean. The majority of the inhabitants were dedicated to agriculture and animal husbandry, except Joseph who as a blacksmith and carpenter provided the town with one of its few dedicated artisans.

Mary’s house was modest, like that of her neighbors. It had two rooms. The interior, was a cave that served both as a barn and a pantry. The three interior rock walls were covered with adobe leading to the entrance to the cave over which hung a low roof made from branches and supported by wooden beams. Light entered through the door. There they had some tools and furniture. A large part of family’s life was spent outside, at the door of the house, frequently under the shade of vines which helped to temper the summer heat. 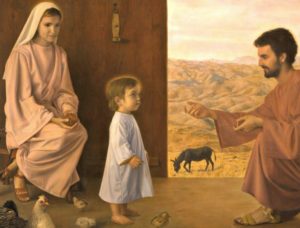 Almost all their neighbors had similar houses. Archeological excavations have brought to light part of ancient Nazareth. In the houses they took advantage of the numerous caverns presented by the terrain as a cellar or a silo, without having to make many modifications. They flattened the floor in front of the cave and often enclosed this space with walls to keep out the elements. It is even possible that the families used the floor this room to sleep.

The work day began with the rising of the sun. Some simple prayers, such as the Shemá, before beginning hard labor. The Shemá is a prayer, taken from the Bible that begins in Hebrew with these words: “Hear, O Israel: The Lord our God, the Lord is one.Love the Lord your God with all your heart and with all your soul and with all your strength. 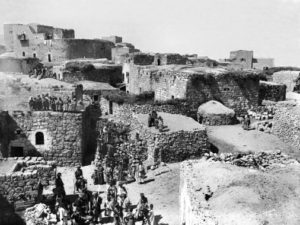 These commandments that I give you today are to be on your hearts. Impress them on your children. Talk about them when you sit at home and when you walk along the road, when you lie down and when you get up. Tie them as symbols on your hands and bind them on your foreheads. 9Write them on the doorframes of your houses and on your gates.” (Dt 6, 4-9).

One of the first task every day after prayer, was the preparation of the bread, the staple everyday food. For this, Mary, as women used to do, began by pounding the wheat grain into powder. They have encountered some domestic grinders, of stone, in the time of our Lord, which they used for these tasks. After the flour was mixed with water and a bit of salt to form a mass, to which they added, except during the Passover Feast, a pinch of yeast.

With the mass fermented they made thin cakes, or some rolls that they cooked in the oven and eaten recently

The everyday food would be quite similar to what we cook now in Mediterranean regions. The bread they split by hand, without using a knife, and ate it with olive oil and accompanied by vine, milk, fruit, and when possible by meat or fish. 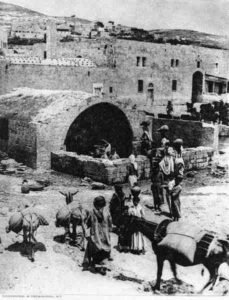 They tended to store the milk in made bottles of sown goat skin and they drank directly from them. The most likely is that almost always a bit acidic. From the milk they also obtained butter and cheese which were basic staples in places such as Galilee. Another important food element was olive oil. Also they ate olives stored in brine.

They took the oil even when they traveled, in thin clay bottles similar to canteens. They also frequently drank wine, which tended to be strong, and due to this they often drank it diluted with water or mixed with honey.

Before eating every day, they tended to recite some prayers giving thanks to God for the food received by his mercy. The blessing of the table they said more or less in these words: “Blessed be the Lord, our God, King of the Universe that has given us this bread today, fruit of the earth. And they responded: “Amen”.

Transporting the water and washing the clothes

For the preparation of the food, the difficult task of transporting the water was completed daily. The fountain in Nazareth was a distance of roughly fifteen minutes walking from the village houses. Possibly, Mary went there every morning to fill a canteen and would return to her home carrying the water on her head, as was the custom in that zone, in order to continue with her work. Also, on certain days Mary would have to return there to wash clothing. 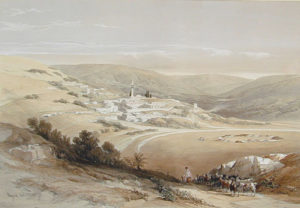 The clothing that Mary had to wash would have been the clothing of her, Joseph and Jesus. The typical habitual outfits were made up of a large interior tunics that tended to be linen. It normally fell until about the ankles. It could be worn with or without sleeves. They tied the tunic around the body using a girdle, which was often wrapped around the body various times, however, not always in a smooth manner. Often in a sort of twisted fashion in which money could be stored. Over the tunic they wore a square shaped cloak, habitually made of wool.

A large part of Mary’s days were, without doubt, completely normal. She spent many hours on domestic tasks: preparing food, cleaning the house and clothing, and ever weaving wool or linen tailoring her family’s clothing. She would arrive exhausted at the end of the day, but with joy of one who knows that this apparently simple tasks had a wonderful supernatural efficiency and that by doing well her work she was carrying out one of the first works of the Redemption.