Skip to content
Home/DESTACADOS-EN, Questions, The origins of .../The History of the Rosary

The History of the Rosary

Among the devotions to Mary, over the years, one stands out clearly: the Rosary

The Christian people have always felt the need for the mediation of Mary, beseeching Omnipotence; channel of grace: thus multiplying over the centuries, Marian devotions, both liturgical and popular. However, among the many devotions to Mary, over the years, one clearly stands out: the Holy Rosary, the pious exercise for excellence in honor of the Blessed Virgin Mary, Mother of God.

In antiquity, the Romans and the Greeks used to crown with roses the statues that represented their gods as a symbol of the offer of their hearts. The word Rosary means “Crown of roses”.

Following this tradition, Christian women who were carried to martyrdom by the Romans, marched to the Coliseum dressed with their more showy clothes and with their heads adorned with crowns of roses as a symbol of joy and the delivery of their hearts to God. At night, Christians gathered their crowns and by every rose, recited a Psalm or a prayer for the repose of the soul of the martyrs.

In the middle ages, they greeted the Virgin Mary with the title of rose, symbol of joy. The blessed Hermann will tell you: “rejoice, you, the same beauty.» «/ I tell you: Rose, Rose “, and a medieval French manuscript reads: « when the beautiful rose Mary begins to flourish, our wintertime tribulations fade and the summer of eternal joy begins to shine».

The images of the Virgin Mary with a «Crown of roses» were often decorated and are sung to Mary as a ‘Garden of Roses’ (in medieval Latin rosarium); Thus is explained the etymology of the name that has come to our days.

At that time, those who did not know how to recite the 150 psalms of the divine office replaced them with 150 Hail Mary’s, accompanied by kneeling, serving to count beads threaded by dozens or knots in a rope. And at the same time would meditate about the life of the Virgin. In s. XIII, in England, the Cistercian Abbot Étienne de Jószáshely writes a few meditations in which appear 15 joys of Our Lady, ending each one with a Hail Mary.

Without entering into a critically historical discussion focused on the details of the origin of the last of the Rosary, in its current structure, we can say to that Santo Domingo de Guzmán is, no doubt, the man who most contributed to the formation of the Rosary and its spread, not without inspiration from the Virgin Mary in his time. The motive was to extend the Albigensian heresy, which fought, “not with the force of arms, but with more consistent faith in the devotion of the Holy Rosary, which was the first to propagate, and that personally and by his sons led the four corners of the world…” (Leo XIII, litt. Supremi apostolatus, 1 Sept. 1883).

At the end of 15th century Dominicans Alain de la Rochelle in Flanders, Santiago of Sprenger and Félix Fabre in Cologne, gave the Rosary a structure similar to today’s: you pray five or fifteen mysteries, each consisting of ten Hail Mary’s. The contemplation of the mysteries, which are divided into joyful, painful and glorious, is structured in order to review the central facts of the life of Jesus and Mary, as in a compendium of the liturgical year and the entire Gospel in the weekly cycle. Lastly, prayer litany, which dates to the early church, is fixed.

Devotion to the Rosary acquired a remarkable boost in times of León XIII adding the litany of Loreto invoking «Queen of the most Holy Rosary».

In recent times the miraculous events of Lourdes and Fatima have contributed in particular to the spread of Marian devotion: “the Blessed Virgin, in our times, wanted to recommend insistently this practice when she appeared at the grotto of Lourdes, and taught the young how to pray the Rosary.

The plenary and typical way of praying the Rosary, with 150 Hail Mary’s, is distributed into three cycles of mysteries; joyful, painful and glorious throughout the week, giving rise to five decades of Hail Mary’s, contemplating five mysteries- daily (the custom tends to assign Sunday, Wednesday and Saturday the glorious; the joyful on Monday and Thursday, and the painful on Tuesday and Friday) praying at the end of the five mysteries the litany of Loreto. Juan Pablo II added the cycle of luminous mysteries on Thursdays. 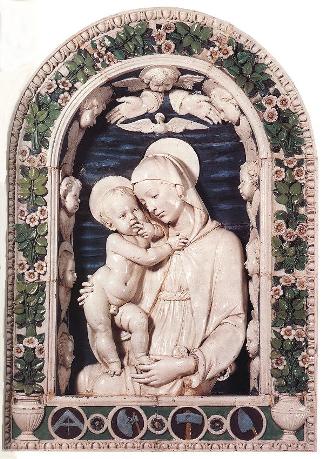 The three groups of mysteries remind us of the three great mysteries of salvation. They evoke the mystery of the incarnation, the joys of the Annunciation, the visitation, the Nativity of the Lord, the presentation of Jesus in the temple, and the purification of his mother and, finally, their meeting among the priests in the temple. The mystery of redemption is represented by the different moments of the passion: prayer and agony in the garden of Gethsemane, the scourging, the crowning with thorns, on the road to Calvary with the cross, and the crucifixion. The mystery of eternal life evokes in us the resurrection of the Lord, his Ascension, Pentecost, the assumption of Mary and her coronation as Queen. «All Credo goes, then, before our eyes, not in an abstract way, with dogmatic formulas, but in a manner concrete in the life of Christ, which descends to us and goes to his father to lead us to it. It is all Christian, in all its depth and splendor dogma, so that we can in this way every day, understand it, taste it and feed our soul with him» (R. Garrigou-Lagrange, the mother of the Savior and our inner life, 3 ed. Buenos Aires 1954, 261)

Juan Pablo II included in the prayer of the Rosary the mysteries of light, which includes several scenes of the life of Jesus: the baptism, the wedding at Cana, the announcement of the Kingdom, and Transfiguration, and the Institution of the Eucharist.

Institution of the feast of the Holy Rosary

On October 7, 1571 the great naval battle of Lepanto, in which the Christians defeated the Turks took place. Christians knew that if they lost this battle, their religion could be put at risk and therefore relied on the help of God through the intercession of the Blessed Virgin. Pope St. Pius V asked Christians to pray the Rosary for the fleet. 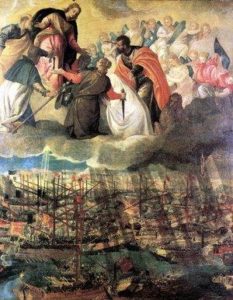 Days later came the messengers with the official news of the Christian triumph. Subsequently, he instituted the feast of our Lady of victories on October 7.

A year later, Gregorio XIII changed the name of the feast day to Our Lady of the Rosary and determined it would be celebrated on the first Sunday of October (in which the battle had been won). Today the feast day of Our Lady of the Rosary is celebrated on October 7th and some Dominicans still celebrate it on the first Sunday of the month.