Skip to content
Home/Blogs, DESTACADOS-EN, The origins of ..., The Virgin Mary/The Devotion to the Virgin Mary in the Early Church

The Devotion to the Virgin Mary in the Early Church

“The first Christians, whose lives are an example for us, showed a loving veneration to the Virgin. In the paintings produced during the first three centuries of Christianity, those that are conserved in the Roman catacombs, the Virgin is contemplated through her representation with the Child God in her arms. We can never be contented in the way we imitate this attitude of the first Christians!

Recent Mariological studies give evidence that the Virgin Mary has been honored and venerated as Mother of God and our Mother since the first centuries of Christianity.

During the first three centuries, the veneration of Mary was essentially included in the rites of adoration of her Son. A Father of the Church summarizes the essence of this primordial Marian cult using these words (referring to Mary): “The prophets announced you and the apostles commemorated you with the highest of praises.”

During these first centuries, only indirect testimonies of the Marian cult exist. Among them are archaeological remains of the catacombs that demonstrate the cult and veneration of the first Christians toward Mary. One of the paintings in the catacombs of Saint Priscilla represents the Virgin with her Child in her arms and a prophet, probably Isaiah, at her side. The other two paintings correspond to the Annunciation and to theEpiphany. All of the paintings mentioned are of the second century. In the catacombs of St. Peter and St. Marcellinus, one admirable painting of the third or fourth century represents Mary between Saints Peter and Paul. There, Mary is portrayed praying with her arms extended. 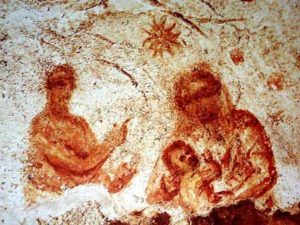 One magnificent demonstration of the Marian cult is the prayer “Sub tuum praesidium” (We fly to thy patronage) that dates back up to the third to fourth century, and that illustrates theintercession of Mary.

The Fathers during the fourth century praise the Mother of God in many and diverse ways.Saint Epiphanius, after combating the error of adoring Mary practiced by a sect in Arabia, writes: “Let Mary be held in honor. Let the Father, Son and Holy Ghost be adored, but let no one adore Mary.” St. Ambrose expresses the same sentiment who after giving praise to “the Mother of all virgins”, is at the same time clear and emphatic in saying that “Mary is the temple of God and not the God of the temple” to put the Marian cult in its rightful position and to distinguish it to the adoration of God.

It can be proven that during the time of Pope Sylvester, in the Roman Forum, where theTemple of Vesta used to be located, a structure was constructed bearing the advocation to “Santa Maria Antiqua” or Ancient St. Mary. In the same manner, Bishop Alexander of Alexandria consecrated a church dedicating it to the Mother of God. Moreover, it is known that Mary was being honored together with our Lord in the Church of the Nativity in Palestine since the era of Emperor Constantine, in remembrance of the miraculous conception of Christ.

Reliable ancient texts dated 225 A.D., used in the liturgical celebration of the Eucharist, mention the veneration of Mary. They also honor her during the feasts of the Incarnation, Nativity, Epiphany, etc. of our Lord. Towards 380 A.D., the first Marian feast, identified as “Memory of the Mother of God”, “Feast of the Most Holy Virgin”, or “Feast of the glorious Mother”, was instituted.

The testimony of the fathers of the Church

The first Father of the Church who wrote about Mary is St. Ignatius of Antioch († c. 110). He defended the veracity of the humanity of Christ against the docetists by affirming that Jesus pertained to the line of David because he was born of Mary. Jesus was conceived by Mary – He came from her – and this conception was virginal, and pertains to the most hidden mysteries in the silence of God.

In his book “Dialogue with Trypho”, St. Justin († c. 167) insists on the reality of thehuman nature of Jesus and, as a consequence of that human nature, he insists also of the maternity of Mary over Jesus. Like St. Ignatius of Antioch, St. Justin emphasizes the virginal conception. Saint Justin bases his Marian reflections on the Eve & Mary parallelism as the passage of Genesis 3:15 suggests, and this perspective which is incorporated in his theology, will serve as the basis of the Marian reflections of the later Fathers of the Church.

St. Irenaeus († c. 202), focuses on the reality of the human corporeality of Jesus and that he really came from the womb of Mary to combat the prevailing Gnostic and Docetic beliefs. Moreover, he bases on the divine motherhood his Christology: it is the human nature assumed by the Son of God in the womb of Mary that gives to the redemptive value of the death of Jesus its universality, i.e., its applicability to all men. He emphasizes also the motherhood of Mary in relation to the new Adam (Christ) and her cooperation in the work of redemption.

The north African Father, Tertullian († c. 222), during the dispute with Marcion, a Gnostic, affirms that Mary is the Mother of Christ because Jesus was engendered by Mary in her womb. 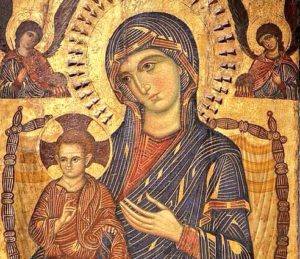 During the third century, the use of “Theotókos” (“Mother of God” in Greek) became more widespread. Origen († c. 254) was the first to apply this title to Mary. Among the prayers of supplication, the title first appeared in the prayer “Sub tuum praesidium” that, as mentioned earlier, is the oldest known Marian prayer. During the fourth century, in opposition to the doctrine of Arius, the confession of faith of bishop Alexander of Alexandria contains the same title. Since then, it gained universality and many were the Holy Fathers who reflected and studied in depth the truth that Mary is the Mother of God. Among them were St. Ephrem, St. Athanasius, St. Basil, St. Gregory of Nyssa, St. Gregory of Nazianzus, St. Ambrose, St. Augustine, Proclus of Constantinople, etc. Because of these, “Mother of God” became the most frequent title applied to Mary.

The truth of the Divine Maternity of Mary was proclaimed as a dogma of the Church in theCouncil of Ephesus in 431 A.D.

“And after the death of the Savior? Mary is the Queen of the Apostles; she is present in the Cenacle and she accompanied them when they received what Christ had promised, the Paraclete; she supported them in their trials and she helped them overcome the obstacles that human weakness bring in along the way: she is a guide, light, and encouragement of the first Christians” (Saint Josemaría Escrivá)

The prerogative or privileges of mary

The account of the devotion to Mary throughout history would not be complete if not for a third basic element: the exceptionality of the person of Mary. The affirmation of her”exceptionality” forms part of her mystery and is rooted in her sanctity which leads one to her so-called “privileges”. The bases of these “privileges” are founded on her Divine Motherhoodand her cooperation in the work of redemption. In reality, these “privileges” are gifts endowed by God so that she can carry out her unique and universal mission.

The existence of these privileges or prerogatives is not a “superfluous” doctrine nor a theological opinion. They are necessary to preserve the integrity of the Christian faith. 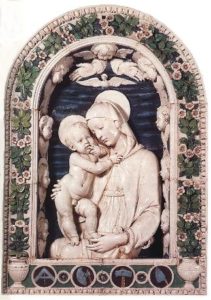 St. Ignatius, St. Justin, St. Irenaeus and Tertullian wrote about the virginity of Mary.Similarly, in Egypt, Origen defends the perpetual virginity of Mary and considers the mother of the Messiah as a model and help of Christians. In the fourth century, the term “aeipathenos” – ever-virgin – was introduced by St. Epiphanius in his confession of the Faith. Later, the Second Council of Constantinople proclaimed it as a Dogma of the Church.

With the affirmation of the perpetual virginity of Mary becoming more and more widespread and universal, another privilege, theabsolute holiness of the Virginwas also given emphasis. Although it had been always believed that she was incapable of sin, the possibility of Mary having had imperfections was considered at first. St. Irenaeus, Tertullian, Origen, St. Basil, St. John Chrysostom, St. Ephraim, and St. Cyril of Alexandria held this belief while St. Ambrose and St. Augustine did not accept it. After the dogmatic proclamation of the Divine Maternity of Mary in the Council of Ephesus in 431 A.D., the consideration of the privilege of absolute holiness of Mary grew stronger and was disseminated with the title “most holy” or “panagia” in Greek.

Since the fourth century, together with the privileges already mentioned (ever-virgin and most holy), the affirmation of her other privileges proceeded. Concretely, themes about her Dormitionor her Assumption, her preservation from all sin including original sin, her task asMediatrix, and her Queenship were developed. Along these lines, St. Modest de Jerusalem, St. Andrew of Crete, St. German of Constantinople, St. John Damascene, and the Fathers of the last centuries of the patristic period who studied in depth these privileges merit special attention.