St. Paul put the cross at the center of his preaching because he understood that true wisdom is the wisdom of love

“In Paul’s encounter with Jesus,” the Holy Father said, “he had understood the central significance of the cross: He had understood that Jesus had died and risen for all and also for [Paul], himself. Both elements were important — the universality: Jesus had truly died for everyone; and the subjectivity: He had died also for me.”

The Pope Emeritus said that the cross thus reveals the “gratuitous and merciful love of God.” 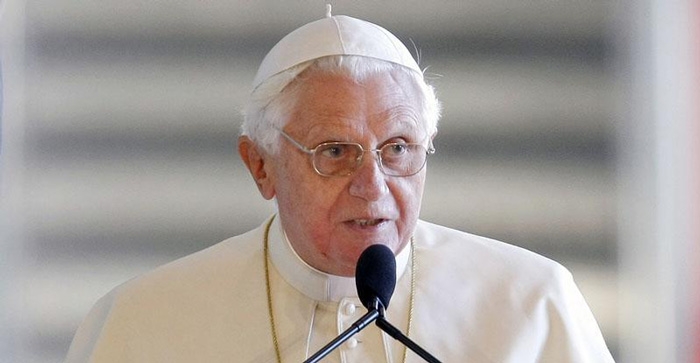 He added, “For St. Paul, the cross has a fundamental priority in the history of humanity; it represents the principal point of his theology, because to say cross means to say salvation as grace given to every creature. The theme of the cross of Christ becomes an essential and primary element in the preaching of the Apostle.”

Benedict XVI said that Paul wanted to remind all of us, not just the Christians of Corinth and Galatia, that “the Risen One is always the One who has been crucified.”

“The ‘scandal’ and the ‘foolishness’ of the cross are precisely in the fact that there, where there seems to be only failure, sorrow and defeat, precisely there, is all the power of the limitless love of God, because the cross is the expression of love and love is the true power that is revealed precisely in this apparent weakness,” he added.

Nevertheless, both today and in Paul’s time, there are those who cannot accept the “foolishness” of the cross, the Pope noted.

“For the Jews, the cross contradicts the very essence of God, who has manifested himself with prodigious signs. Therefore, to accept the cross of Christ means to undergo a profound conversion in the way of relating with God,” he said. “[F]or the Greeks, that is, the pagans, the criteria for judgment in opposing the cross is reason. […] For those who, like the Greeks, sought perfection in the spirit, in pure thought, it was already unacceptable that God became man, submerging himself in all the limits of space and time.

“Therefore it was decidedly inconceivable to believe that a God could end up on the cross! And we see how this Greek logic is also the common logic of our time.”

Why then, the Holy Father asked, did Paul make of the cross the “fundamental point of his preaching?”

“Centuries after Paul, we see that the cross, and not the wisdom that opposes the cross, has triumphed. The Crucified is wisdom, because he manifests in truth who God is, that is, the power of love that goes to the point of the cross to save man. […] The Crucified reveals, on one hand, the weakness of man, and on the other, the true power of God, that is, the gratuitousness of love: Precisely this gratuitousness of love is true wisdom.”

Benedict said an “admirable synthesis” of this theology of the cross can be found in the Second Letter to the Corinthians.

There, there are two “fundamental affirmations,” he noted. “On one hand, Christ, whom God has treated as sin on our behalf, has died for us; on the other hand, God has reconciled us with himself, not attributing to us our sins. By this ‘ministry of reconciliation’ all slavery has been purchased.”

It is here, the Holy Father said, that we can see “how all of this is relevant for our lives.”

He explained: “We also should enter into this ‘ministry of reconciliation,’ which always implies renouncing one’s own superiority and choosing the foolishness of love.

“St. Paul has renounced his own life, giving himself totally for the ministry of reconciliation, of the cross that is salvation for all of us. And this is what we should also know how to do: We can find our strength precisely in the humility of love and our wisdom in the weakness of renunciation to thus enter into the strength of God.

“We should build our lives on this true wisdom: To not live for ourselves, but to live in the faith in this God, about whom all of us can say: ‘He loved me and gave himself up for me.'”