Skip to content
Home/DESTACADOS-EN, Do you know who it was..?, Saint of the day/Saint Nicholas of Bari (Santa Claus) – 6 December

The devotion to Saint Nichols has been a widespread phenomenon: thousands and thousands of churches HAVE dedicated to him in different parts of the world, and so are the children who wait their presents each Christmas time…

Saint Nicholas was Bishop of Myra, in Lycia, Asia Minor (present day Dembre in Turkey) in the sixth century. His relics are venerated in Bari (Italy). There is a scarcity of historical documents on this saint. His most ancient biographies can be traced back to some few centuries after his lifetime.

In all cases, he is believed to have been born inPatara (Asia Minor) around the year 270, and that he died on the 6th of December between the years 345 and 352.

The little that we know about the figure of Saint Nicholas contrasts well with the universality of his fame and devotion in both the east and the west, even up to the modern times.

There is also an abundance of legends that had been propagated around his figure. His popularity is far-reaching as demonstrated by the more than two thousand churches that had been consecrated to him. His intercession is ever significant among those who find themselves in states of grave danger like shipwreck, fires, and even difficult economic situations. 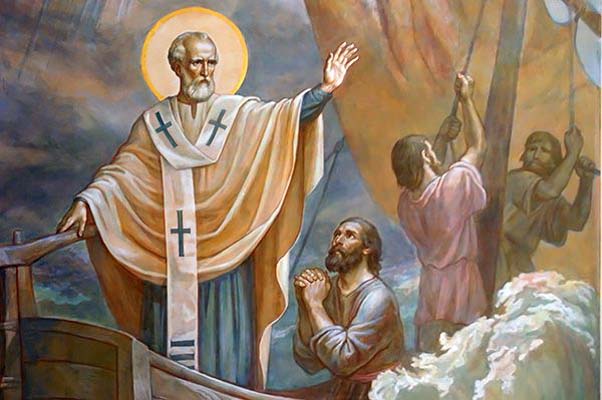 There are quite a number of works written about the saint. The most important probably is that of Saint Methodius, Archbishop of Constantinople, who compiled stories that people told about him, mostly stories about his piety and heroism. According to these stories, ever since his birth, Nicholas has had numerous acts of holiness: He was a remarkable child because whatever he had, he gave to the poor.

He told his parents: “I would be a sinner not to give much to the poor, given that God has given us a lot.”Generosity is a virtue that has always been associated with this saint.

He was ordained a priest by a bishop who happened to be his uncle. When his parents died while attending to the sick during an epidemic, he was left with a big fortune. As expected, he gave up his riches and distributed them among the poor. Next, he decided to go to the monastery.After visiting Jerusalem, he went to the city of Myra (Turkey)where he was appointed Bishop which he always considered to bepart of the divine plan of God.

Saint Nicholas is especially famous for the numerous miracles that he performed. He is often portrayed surrounded by many children, who, according to legend, were cured from their afflictions thanks to his incessant prayers.

Another story relates how he saved some stranded mariners during a stormy night at high sea. They started to pray: “Oh God, through the prayer of our good bishop Nicholas, save us!” Then suddenly, they saw the boat of Saint Nicholas appear from a distance. After he gave them his blessing, the sea started to calm and the storm disappeared. Because of this, he is also considered the Patron Saint of mariners.

Saint Nicholas was imprisoned along with other Christians during the persecution of the emperor Licinius. There in prison he was flogged and beaten. In spite of these circumstances, his apostolic zeal never faltered as he took advantage to talk about Christ in prison to those whom he was with.

He constantly fought against idolatry and converted a lot of Jews and Arabs. When he died, a lot of people received miraculous graces through his intercession.

In Rome, in 515, a church was built in his honor.1087, the relics of Saint Nicholas were transferred to Bari: according to tradition (supported by documents from the 12th century), when the Moslems invaded Turkey, a group of Christians rescued some relics and transported them to Bari (Italy). Ever since, devotion to this saint grew fast and became popular in all Europe.

In 1089, Pope Urban II consecrated the crypt where his remains lie. He is the Patron Saint of Russia, Greece, and Turkey and a lot of churches in the whole world have been dedicated to him. In the east, he is called Saint Nicholas of Myra, the city where he was Bishop; but in the west, he is more popularly known as Saint Nicholas of Bari. At present, he is still considered by many as the Patron Saint of Children and of Mariners.

Origin of the Figure of Santa Claus

His feast day is the 6th of December. In some European countries, on this day,children share and give out candies in commemoration of Saint Nicholas, given his famous fond of children and his generosity. Also, some countries start the Christmas preparations and celebrations precisely on this day. 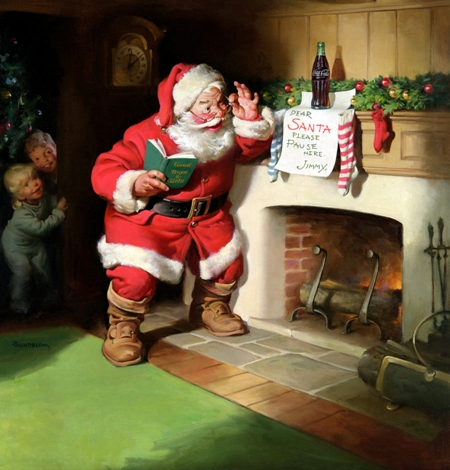 During the 17th and 18th centuries, the arrival of the Dutch and German immigrants in America, mostly Catholics in tradition, led to the fusion of their devotion to Saint Nicholas with the predominant British culture of Father Christmas during that time.

Inspired by the German name of Saint Nicholas (Nikolaus), they started to call him Santa Claus and was further popularized in the 1820s through a famous American poem of Clement Clark Moore. He was portrayed as a pleasant and chubby old man with a white beard, also called St. Nick,who during Christmas Eve entered each house (through the chimney) and distributed gifts among children while riding a flying sleigh drawn by reindeers.

The Coca-Cola brand used the Santa Claus campaign as part of its commercials during Christmas. Since then, Santa Claus has been known in his famous red-and-white dress. He is alternatively called Papa Noel and of course – remembering his origin – Saint Nicholas.