¿How can a woman be the Mother of God?

Faith in the fact that God himself became man has been the joyful conviction of the Church from the very beginning. To come into the world, God chose to rely on the free cooperation of a human being, Mary, to be the mother of his Son through the work of the Holy Spirit.

And the Church, from her beginnings, has honored Mary as the daughter of God the Father, mother of God the Son, and spouse of God the Holy Spirit. How did God choose Mary? How did she conceive the Son of God? Why do we call Mary Virgin and Mother?

1. How did Mary conceive the Son of God made man?

The historical event which God had foreseen from all eternity took place in a Nazareth, a village in Galilee, when the Angel Gabriel appeared to a young Jewish woman, “a virgin betrothed to a man whose name was Joseph, of the house of David; and the virgin’s name was Mary” says St Luke in chapter 1 of his Gospel.

To come into the world God wanted the free co-operation of a creature, Mary, to be the mother of his Son.

“The Father of mercies willed that the Incarnation should be preceded by assent on the part of the predestined mother, so that just as a woman had a share in the coming of death, so also should a woman contribute to the coming of life.”
Catechism of the Catholic Church, 488, 504, 511.

2. How did God choose Mary? What did the Angel Gabriel say to Mary in Nazareth, and what was her answer?

St Luke tells in the first chapter of his Gospel how the Angel Gabriel said to Mary, “Hail, full of grace, the Lord is with you!” When she heard these words, she wondered what this greeting could mean. But the angel said to her, “Do not be afraid, Mary, for you have found favor with God. You will conceive and bear a son, and you will call his name Jesus. 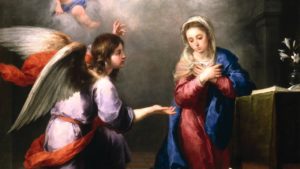 He will be great, and will be called the Son of the Most High; and the Lord God will give to him the throne of his father David, and he will reign over the house of Jacob for ever; and of his kingdom there will be no end.”
Mary said to the angel, “How shall this be, since I have no husband?” And the angel said to her, “The Holy Spirit will come upon you, and the power of the Most High will overshadow you; therefore the child to be born will be called holy, the Son of God.”

Jesus is conceived by the Holy Spirit in the Virgin Mary’s womb because he is the New Adam, who inaugurates the new creation: “The first man was from the earth, a man of dust; the second man is from heaven.” From his conception, Christ’s humanity is filled with the Holy Spirit, for God “gives him the Spirit without measure.” From “his fullness” as the head of redeemed humanity “we have all received, grace upon grace.”
Catechism of the Catholic Church, 504.

3. Was Mary free to respond to God’s plans for her?

Mary was invited to conceive him in whom the fullness of the divinity was to dwell bodily, and she asked about what she did not understand – “How shall this be, since I have no husband?” God’s response to her question was, “The Holy Spirit will come upon you.” And she pronounced her “fiat”, yes, “Let it be to me according to your word,” in the name of all human nature.

The Virgin Mary, by her faith and free response, took up God’s plan for the salvation of mankind. By her obedience she became the new Eve, mother of the living.
Catechism of the Catholic Church, 484, 511.

4. What does it mean to say that Jesus was conceived by the work and the grace of the Holy Spirit?

It means that God became man without the intervention of a human father. Jesus has no Father except God (cf. Luke 2:48-49). It means that his Mother, Mary, was a virgin. Mary’s virginity manifests God’s absolute initiative in the Incarnation of the Word.
Catechism of the Catholic Church, 503.

5. What is the connection between Eve and Mary?

Throughout the Old Covenant Mary’s mission was prefigured by that of many holy women (Sarah, who conceives a son in spite of her old age; Hannah, the mother of Samuel; Deborah; Ruth; Judith and Esther). At the very beginning there was Eve; despite her disobedience, she receives the promise of a posterity that will be victorious over the evil one.
After a long period of waiting the times are fulfilled in her, the exalted Daughter of Sion, and the new plan of salvation is established. Mary “stands out among the poor and humble of the Lord, who confidently hope for and receive salvation from him.”
Catechism of the Catholic Church, 489.

6. What does it mean to say that Mary is full of grace

The angel Gabriel at the moment of the annunciation salutes her as “full of grace”. In fact, in order for Mary to be able to give the free assent of her faith to the announcement of her vocation, it was necessary that she be wholly borne by God’s grace. Mary “was enriched by God with gifts appropriate to such a role.”

It means that she was conceived without original sin. Through the centuries the Church has become ever more aware that Mary, “full of grace” through God, was redeemed from the moment of her conception. That is what the dogma of the Immaculate Conception confesses, as Pope Pius IX proclaimed in 1854:

“The most Blessed Virgin Mary was, from the first moment of her conception, by a singular grace and privilege of almighty God and by virtue of the merits of Jesus Christ, Saviour of the human race, preserved immune from all stain of original sin” (Pius IX, Bull Ineffabilis Deus, DS 2803). Catechism of the Catholic Church, 490-491.

7. How can a woman be the Mother of God?

Mary is truly “Mother of God” since she is the mother of Jesus Christ, the eternal Son of God made man, who is God himself, as we are told by Sacred Scripture, God’s Revelation. This truth of faith has been proclaimed by Christians from the earliest times.

The eyes of faith can discover in the context of the whole of Revelation the mysterious reasons why God in his saving plan wanted his Son to be born of a virgin. These reasons touch both on the person of Christ and his redemptive mission, and on the welcome Mary gave that mission on behalf of all men.
Catechism of the Catholic Church, 509, 502.

8. Why is Mary also the Mother of Christians and Mother of the Church?

Jesus is Mary’s only son, but her spiritual motherhood extends (cf. Jn 19:26-27; Ap 12:17) to all men whom indeed he came to save: “The Son whom she brought forth is he whom God placed as the first-born among many brethren (Rm 8:29), that is, the faithful in whose generation and formation she co-operates with a mother’s love.”

“The Virgin Mary is acknowledged and honored as being truly the Mother of God and of the redeemer. She is ‘clearly the mother of the members of Christ’ since she has by her charity joined in bringing about the birth of believers in the Church, who are members of its head.” “Mary, Mother of Christ, Mother of the Church.”
Catechism of the Catholic Church, 501, 963-967.

At once virgin and mother, Mary is the symbol and the most perfect realization of the Church: “the Church indeed (…) by receiving the word of God in faith becomes herself a mother. By preaching and Baptism she brings forth sons, who are conceived by the Holy Spirit and born of God, to a new and immortal life. She herself is a virgin, who keeps in its entirety and purity the faith she pledged to her spouse” (Lumen Gentium, no. 64).
Catechism of the Catholic Church, 507

9. What does the Assumption of our Lady into Heaven mean?

The Blessed Virgin, the Immaculate, was at the end of her earthly life raised body and soul to heavenly glory, and likened to her risen Son in anticipation of the future lot of all the just; and we believe that the Blessed Mother of God, the New Eve, Mother of the Church, continues in heaven her maternal role with regard to Christ’s members.
Credo of the People of God, 15.

We look to Mary to contemplate what the Church already is in her mystery on her own “pilgrimage of faith,” and what she will be in the homeland at the end of her journey. There, “in the glory of the Most Holy and Undivided Trinity,” “in the communion of all the saints,” the Church is awaited by the one she venerates as Mother of her Lord and as her own mother.

“In the meantime the Mother of Jesus, in the glory which she possesses in body and soul in heaven, is the image and beginning of the Church as it is to be perfected in the world to come. Likewise she shines forth on earth until the day of the Lord shall come, a sign of certain hope and comfort to the pilgrim People of God” (Lumen Gentium, 68).
Catechism of the Catholic Church, 972

10. Why does Our Blessed Lady hold a central place in Christian life?

“All generations will call me blessed”: these are our Lady’s words in the Magnificat, recognizing what God has worked in her. “The Church’s devotion to the Blessed Virgin is intrinsic to Christian worship.” The Church rightly honors “the Blessed Virgin with special devotion. From the most ancient times the Blessed Virgin has been honored with the title of ‘Mother of God,’ to whose protection the faithful fly in all their dangers and needs

This very special devotion differs essentially from the adoration which is given to the incarnate Word and equally to the Father and the Holy Spirit, and greatly fosters this adoration.” The liturgical feasts dedicated to the Mother of God and Marian prayer, such as the rosary, an “epitome of the whole Gospel,” express this devotion to the Virgin Mary.
Catechism of the Catholic Church, 971