The vocation of Saint Joseph

THE VOCATION OF SAINT JOSEPH

And Joseph her husband, being a righteous man and not wanting to disgrace her, planned to send her away secretly. (MT 1:19)

For many nights, Joseph could not sleep. He frequently woke up troubled by a dream that he had wherein men at the square were laughing at him.

Now he gets some sleep after hours and hours of thinking…

Joseph finds himself in a dilemma: he knows for certain that Mary is going to be a mother. As their friends congratulated him on the occasion, it caused him great pain like a bitter thorn thrust into his heart. He was in great suffering and his eyes showed it. Keep quiet, suffer… and don’t judge.

On the other hand, Mary kept silent.  Heroic, she would rather suffer from the apparent disgrace and the suspicion that people will have of her than disclose the secret she has received from God.

Joseph was certain about the purity of Mary. Her pure eyes, her gentleness, and her strong character showed it. However, there was something profound, truthful, and supernatural about her that made people not question her situation. It was a great test for both of them. 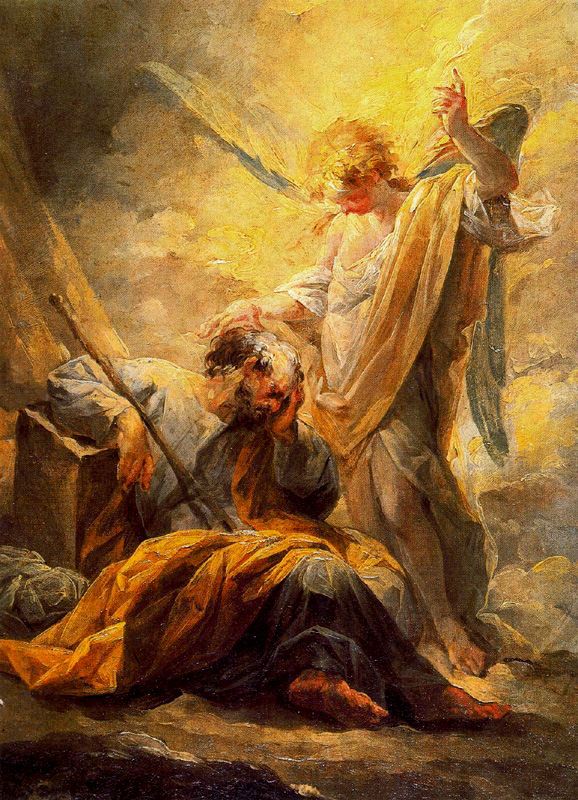 It was a dreadful inner struggle that people were unaware of.  They were harrowing storms that ordinary men did not understand.  One fights to stay faithful when every power in the world goes against it.  This trial demanded holiness.

Everybody thought that he was the father, but he knew differently.  He suffered because of this mystery, but at the same time, respected the situation.

The law of the time required the stoning of adulterous women.  How great a sin!  But for Mary, it could not be the case.  However, Joseph did not turn her in.  His spirit suffered from not understanding two apparently opposed truths: the purity of Mary and that she was going to be a mother.  Joseph instead resorted to suspending his judgment.

His course of action was such because he was a just man, even if he had all the reasons to be gravely offended. He did not resort to any legal action such as divorce, which would entail the public reprobation of the accused, but instead followed the notions of charity, choosing to leave her secretly in order to not ruin her reputation.

And what about us, fast in judgment? We could have very easily condemned her. We usually think ill in order not to deceive ourselves; however, it is better to willingly allow ourselves to be deceived while thinking well about bad people than to wrongly accuse someone who in the end turns out to be a good person.

It is important to know when to stop judgment, and more importantly talking ill of people, even if it is a more logical argument to do so. Many times the persons to whom we direct our judgment are actually innocent; thus, in all cases, we should ignore the personal motives of their actions, which at times could very well justify our decisions.

Thinking well of others gives us inner peace and saves us from many bitter sorrows.

Joseph suspended his judgment on Mary, even if he had all the reasons to do so, and even if this dilemma caused him great sorrow.

He decided to do what he thought was best. It was also a form of judgment that informed his personal conduct before the situation. After having spent so much time thinking, he arrived at his own judgment, and his judgment was holy.

The angel of the Lord appeard to him: “Joseph, son of David, do not fear to take Mary as your wife, for that which is conceived in her is from the Holy Spirit.”

He prescribed to him the name that he was to call the Child, and told him about his mission. Joseph realized that everything was being fulfilled according to the prophecy.

It is prudent to suspend one’s judgment, even if it has been formed with all rectitude.

Joseph had made his decision with tears, charity, and justice. He reached this conclusion by means of a painful and holy way. He is now asked to surrender his judgment. His judgment might have been the best humanly speaking, but it was not the best according to the plans of God.

Surrender one’s judgment- a trait of the wise. Some might say: “My decisions have been based on good and careful judgment!” “It’s not that it is vulgar and imprudent!” I say to you: neither was the judgment of Joseph.

They may retort: “He was warned by an angel!” The angel was also a creature, and God has many ways of communicating his Will, of teaching us that we are often wrong. Joseph surrendered his judgment without hesitation, and, upon waking up, did what he was told.