Acts of the martyrdom of Sts. Perpetua and Felicity (207 AD)

The acts of martyrdom of Saints Felicity and Perpetua (7th of March, 203) is highly significant in the sense that it give us an idea, at least approximately, of the demands of of being a Christian in the public, social and family life. The example of Perpetua is a remarkable demonstration of placing the faith above family ties.

There were apprehended the young catechumens, Revocatus and Felicity his fellow servant, Saturninus and Secundulus. With them also was Vibia Perpetua, nobly born reared in a liberal manner, wedded honorably; having a father and mother and two brothers, one of them a catechumen likewise, and a son, a recently-born child; and she herself was about twenty-two years of age.

What follows here shall she tell herself; the whole order of her martyrdom as she left it written with her own hand and in her own words.

When, she said, we were still under legal surveillance and my father was liked to vex me with his words and continually strove to hurt my faith because of his love:

– Father, said I, Do you see (for examples) this vessel lying, a pitcher or whatsoever it may be?

– Can it be called by any other name than that which it is?

– So can I call myself nought other than that which I am, a Christian. 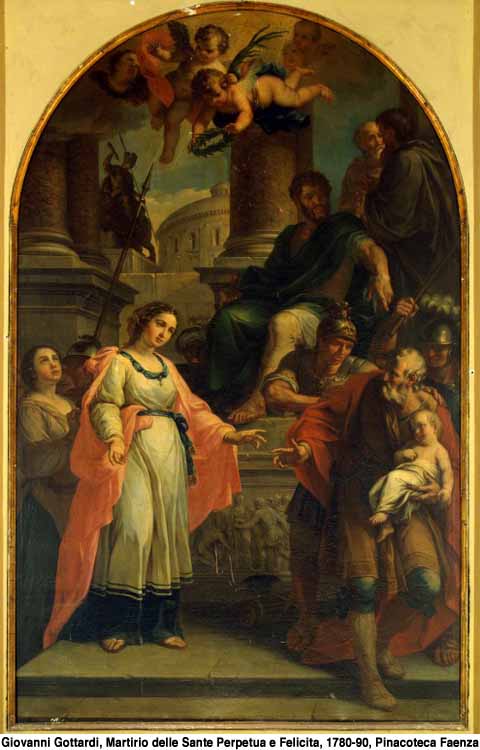 A few days after, the report went abroad that we were to be tried. Also my father returned from the city spent with weariness; and he came up to me to cast down my faith saying:

– Have pity, daughter, on my grey hairs; have pity on your father, if I am worthy to be, called father by you; if with these hands I have brought you unto this flower of youth- and I-have preferred you before all your brothers; give me not over to the reproach of men. Look upon your brothers; look upon your mother and mother’s sister; look upon your son, who will not endure to live after you. Give up your resolution; do not destroy us all together; for none of us will speak openly against men again if you suffer aught.

This he said fatherly in his love, kissing my hands and grovelling at my feet; and with tears he named me, not daughter, but lady. And I was grieved for my father’s case because he would not rejoice at my passion out of all my kin; and I comforted him, saying:

– That shall be done at this tribunal, whatsoever God shall please; for know that we are not established in our own power, but in God’s.

And he went from me very sorrowful.

Another day as we were at meal we were suddenly snatched away to be tried; and we came to the forum. Therewith a report spread abroad through the parts near to the forum, and a very great multitude gathered together. We went up to the tribunal. The others being asked, confessed. So they came to me. And my father appeared there also, with my son, and would draw me from the step, saying:

– Have mercy on the child.And Hilarian the procurator – he that after the death of Minucius Timinian the proconsul had received in his room the right and power of the sword – said:

– Spare your father’s grey hairs; spare the infancy of the boy. Make sacrifice for the Emperors’ prosperity.

– I won’t perform the sacrifice. – You are a Christian, then?

And when my father stood by me yet to cast down my faith, he was bidden by Hilarian to be cast down and was smitten with a rod. And I sorrowed for my father’s harm as though I had been smitten myself; so sorrowed I for his unhappy old age. 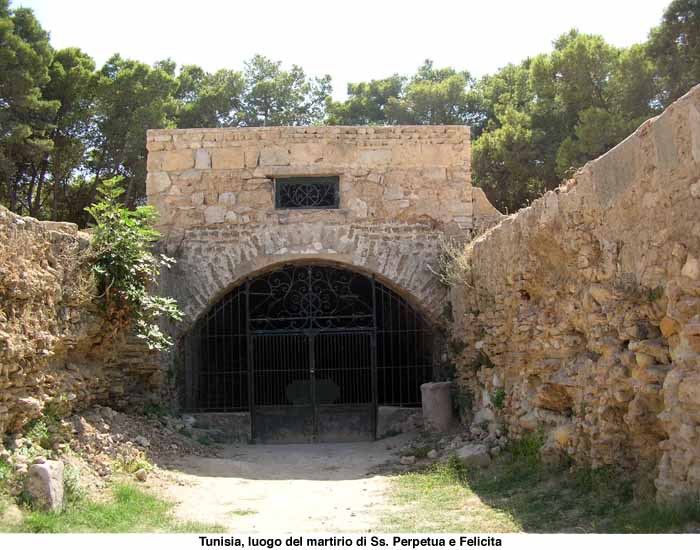 Then a few days after, Pudensthe adjutant, in whose charge the prison was, who also began to magnify us because he understood that there was much grace in us, let in many to us that both we and they in turn might be comforted.

Now when the day of the games drew near, there came in my father to me , spent with weariness, and began to pluck out his beard and throw it on e ground and to fall on his face cursing his years and saying such words as might move all creation. I was grieved for his unhappy old age.

As for Felicity, she too received this grace of the Lord. For because she was now gone eight months (being indeed with child when she was taken) she was very sorrowful as the day of the games drew near, fearing lest for this cause she should be kept back (for it is not lawful for women that are with child to be brought forth for torment) and lest she should shed her holy and innocent blood after the rest, among strangers and malefactors. Also her fellow martyrs were much afflicted lest they should leave behind them so good a friend and as it were their fellow-traveller on the road of the same hope. Wherefore with joint and united groaning they poured out their prayer to the Lord, three days before the games. Incontinently after their prayer her pains came upon her. And when by reason of the natural difficulty of the eighth month she was oppressed with her travail and made complaint, there said to her one of the servants of the keepers of the door:

– You that thus make complaint now, what wilt you do when you are thrown to the beasts, which you didst contemn when you would not sacrifice?

I myself now suffer that which I suffer, but there another shall be in me who shall suffer for me, because I am to suffer for him.

So she was delivered of a daughter, whom a sister reared up to be her own daughter. 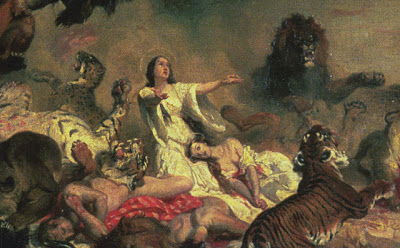 When they were being more cruelly handled by the tribune because through advice of certain most despicable men he feared lest by magic charms they might be withdrawn secretly from the prison house, Perpetua answered him to his face:

– Why do you not allow us to take some comfort, seeing we are victims most noble, namely Caesar’s, and on his feast day we are to fight? Or is it not your glory that we should be taken out thither fatter of flesh?

The tribune trembled and blushed, and gave order that they should be more gently handled, granting that her brothers and the rest should come in and rest with them. Also the adjutant of the prison, Pudens, now believed.

But for the women the devil had made ready a most savage cow, prepared for this purpose against all custom; for even in this beast he would mock their gender. They were stripped therefore and made to put on nets; and so they were brought forth. The people shuddered, seeing one a tender girl, and the other, recently gave birth. So they were called back and clothed in loose robes.

Perpetua was first thrown, and fell upon her loins. And when she had sat upright, her robe being rent at the side, she drew it over to cover her thigh, mindful rather of modesty than of pain. Next, looking for a pin, she likewise pinned up her dishevelled hair; for it was not meet that a martyr should suffer with hair dishevelled, lest she should seem to grieve in her glory.

So she stood up; and when she saw Felicity smitten down, she went up and gave her her hand and raised her up.. And both of them stood up together and the (hardness of the people being now subdued) were called back to the Gate of Life. There Perpetua being received by one named Rusticus, then a catechumen, who stood close at her side, and as now awakening from sleep (so much was she in the Spirit and in ecstasy) began first to look about her; and then (which amazed all there), she asked:

– When are we to be thrown to the cow?

And when she heard that this had been done already, she would not believe till she perceived some marks of mauling on her body and on her dress. Thereupon she called her brother to her, and that catechumen, and spoke to them, saying.

– Stand fast in the faith, and love you all one another; and be not offended because of our passion.

And when the people besought that they should be brought forward, that when the sword pierced through their bodies their eyes might be joined thereto as witnesses to the slaughter, they rose of themselves and moved, whither the people willed them, first kissing one another, that they might accomplish their martyrdom with the rites of peace.

The rest not moving and in silence received the sword; Saturus (the one who introduced Felicity, Perpetua and the others to the faith and who voluntarily presented himself as a Christian before the tribunal so as to share the fate of his Christian friends) much earlier gave up the ghost; for he had gone up earlier also, and now he waited for Perpetua likewise.

Perpetua, that she might have some taste of pain, was pierced between the bones and shrieked out; and when the swordsman’s hand wandered still (for he was a novice), herself set it upon her own neck. Perchance so great a woman could not else have been slain (being feared of the unclean spirit) had she not herself so willed it.

O most valiant and blessed martyrs! O truly called and elected unto the glory of Our Lord Jesus Christ! Which glory he that magnifies, honors and adores, ought to read these witnesses likewise, as being no less than the old, unto the Church’s edification; that these new wonders also may testify that one and the same Holy Spirit works ever until now, and with Him God the Father Almighty, and His Son Jesus Christ Our Lord, to Whom is glory and power unending for ever and ever. Amen.

Acts of the martyrs