Skip to content
Home/DESTACADOS-EN, Saint of the day/Saint Patrick, Apostle of Ireland – March 17

He was born in England around 385. His mother was a relative of Saint Martin of Tours and his father was an officer of the Roman army. Both were good Christians. He was taken very young as a captive to Ireland. Once freed, he was ordained a priest and bishop, and dedicated the rest of his life to the evangelization and ecclesiastical organization of his new homeland, of which he is a patron saint.

At age 16, Patrick was captured by a group of Irish pirates taking him as a prisoner and later sold him in Ireland as a slave to Milchu, the northern chief of Ireland. He spent six years there working as a shepherd. Divine Providence took advantage of this time for his conversion, preparing him for his future apostolate because, in those solitudes, he dedicated much time praying and meditating. He says in his book called “Confessions” that he said more than a hundred small daily prayers and that he did more than a hundred times the sign of the cross every day.

After praying to God asking for light, one night, in his dream, a voice told him to go to the sea where a ship would receive him. Fleeing from his master, he walked several miles on foot until he reached the sea where he found the ship. However, the captain of the ship refused to receive him. So, he prayed fervently asking God to change the will of the captain, who, later, agreed to take him to France.

Upon reaching France, they landed in an uninhabited region; when after walking for several hours, many of them fainted out of hunger and so the captain spoke to Patrick, saying: “You who believe in Christ, pray to Him to send us some food lest we die of hunger”. Patrick began praying. Soon, lo and behold, a herd of wild boars appeared. Then, they all ate in abundance and gave thanks to God for granting the prayer of Patrick.

In France, he became a monk, under the direction of St. Germanus of Auxerre, who instructed him the Scriptures. Then, Patrick dedicated himself living a life of prayer and meditation. Sometimes, he would dream hearing voices of Irish people pleading, “Come and walk among us”. He spent many hours praying, reading, meditating, and preparing himself to be a missionary. 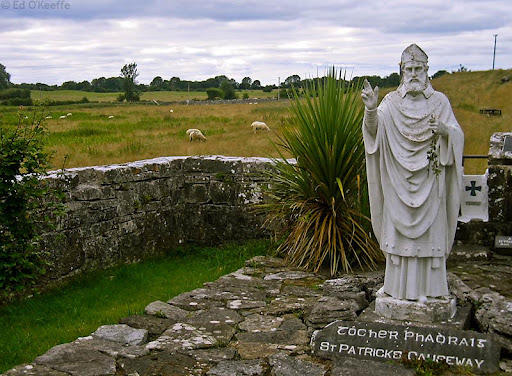 He went to Rome to complete his studies and receive priestly ordination. Then, Pope Celestine I ordered him to be a consecrated bishop to send him as a missionary to Ireland. He was consecrated by St. Maximus, bishop of Turin.

When he arrived in Ireland, the chief of the pagan tribes struck him with a sword. The saint, in response, made the sign of the cross, paralyzing the hand of the chief. That chief, awestruck with what happened, then wanted to be baptized along with his subjects. When reading the old chronicles, one gets struck with so many prodigies and miracles with which God favored Patrick.

Many pagan priests opposed him. One Holy Saturday, when Patrick lit the Easter fire, pagan priests rushed with all their fury to turn it off, but to their surprise, they could not. So, one of them exclaimed: “The fire of the religion, which Patrick has enkindled, will spread all over this island”. And they walked away. True enough, that remark has been fulfilled. The Catholic religion spread in such a way throughout Ireland, which up to today remains a Catholic country, being illuminated by the light of Christ.

A dozen times, he was taken as a prisoner by the adherents of pagan religions. More than five times, they tried to assassinate him. In “Confessions” he wrote: “Every day I live in danger of being kidnapped or being attacked to death. But I trust in the mercy of God, following His words in Psalm 55: ‘Put your worries in the hands of God. Then he will take care of you’”.

With Pelagian heretics who believe that mortal will has the capacity to do good or evil without divine aid, Patrick found a great adversary because he lived preaching that one can only be good if God gives us the grace to be, for by our own strength we are only capable of sin and evil. He iterated that if God does not give us his very special help, we will not be able to do good—thus, become holy. The Pelagians tried many times to assassinate him, but according to many accounts, there was a miraculous intervention of God that freed him from death every time his enemies tried to take his life.

Patrick had an interesting approach to the evangelization of the people of Ireland. Since the island was inhabited by several pagan tribes, he tried winning the trust of the chieftains. Once the chief converts, many of his subjects would also follow. If the chief did not convert, Patrick would, nonetheless, earn his friendship. As such, the field was still open to evangelization, converting many others—even the relatives of the chieftain. 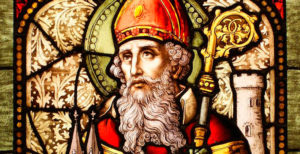 The clover leaf symbol of Ireland

Another approach he had to evangelization was to use a very simple language, which makes it easier for the others to grasp the Christian faith. For example, in explaining the doctrine of the Blessed Trinity, he presented them with a clover leaf and told them that just as these three leaflets form a single leaf, so the three divine persons: The Father, The Son, and The Holy Spirit, form one true God. As such, many listened to him with pleasure, understanding the teachings of the faith with utmost clarity.

He traveled around the island for thirty years teaching religion, consecrating bishops and priests, and founding monasteries. He had a good idea that the bishop of each region should at the same time be the abbot or superior of the most important monastery of that place. Thus, each bishop became fervently religious and had the help of his monks to teach religion to people. The vocations that Patrick obtained for the priesthood and the religious life were numerous.

His favorite subjects in preaching were: the qualities of God (His power, wisdom, goodness, mercy, justice, holiness, etc.), the passion of Our Lord and its consequences, the need for conversion and penance, and the importance of filling our day with small prayers. He also highly recommended the sign of the cross.

In addition, he succeeded in reforming the civil laws of Ireland, leaving all the good laws that they had—which was a lot—but also adding the Christian principles into them. In this way, all the legislation in the country was made in accordance with Catholic principles, which has contributed to the fact that this nation has remained firm in the faith for more than 15 centuries, despite many persecutions.

His chroniclers say that Patrick was a very simple man with a great spirit of humility. He was a tireless worker and his effort to spread religion is comparable to the efforts of the twelve apostles or with the prophets of the Old Testament. If he was not preaching the catechism or visiting the sick, he would devote himself to prayer and meditation. His manner of dealing with people was extraordinary and he had an exceptional ability to forgive those who offended him. Nonetheless, he was also strong and inexorable in opposing the erroneous principles that his enemies were propagating. He did not allow errors to spread to the places where he preached. It can be said that because of this, it became harder for the enemies of Catholicism to propagate their heresies, which has been one of the strong reasons why Ireland has remained a Catholic nation.

St. Patrick died on March 17, 461. Through his intercession, may God grant us the grace to become good Catholics until the last moment.