Skip to content
Home/DESTACADOS-EN, The origins of .../The Origins of the Holy Week

The Origins of the Holy Week

How and when did the tradition of the Paschal Triduum start in the Church?

The Holy Paschal Triduum of the Passion and Resurrection of our Lord is the highest point of the Liturgical Year. During the Triduum, the Church commemorates the most important events in the life of our Lord: his last days on earth.

The “Paschal Triduum,” used to refer to the feast days of the Passion, Death and Resurrection of Jesus Christ, has been a relatively recent expression, which probably dates back to the 1930s. However, at the end of the fourth century, Saint Ambrose already spoke of aTriduum Sacrum referring to the different elements of Christ’s Paschal Mystery, for three days, et passus est, et quievit et resurrexit.

Impelled by the historical significance of the death of Christ, the primitive Church sought the need to celebrate liturgically this salvific event. A memorial rite was installed in accordance with the express desire of our Lord that the Paschal Mystery be sacramentally renewed.

During the early phases of the life of the Church, Easter was celebrated cyclically starting with the Eucharistic Assembly commemorated on the first day of the week, the day of the Resurrection of our Lord (dominicus dies) on Easter Sunday. Soon after in the second century, one Sunday during the year was reserved specifically for the celebration of this salvific mystery of Christ. 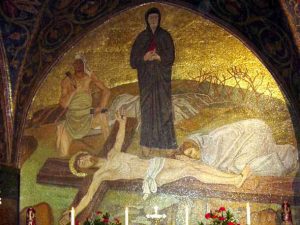 By this time, the Church began to celebrate more systematically the Paschal Triduum when it formally started to relive historically the mysteries of Christ’s life, starting in Jerusalem, where the Passion and Resurrection of Christ actually took place.

In addition, the dogmatic and liturgical response of the orthodoxy to the Arian heresyduring that time caused a renewed attention of the faithful towards the person of Jesus Christ (Son of God and Son of Mary) and his historical figure.

Each celebration of the Paschal Triduum contains its particular physiognomy: the afternoon ofHoly Thursday commemorates the institution of the Eucharist; Good Friday is dedicated especially to the Passion and Death of Jesus on the Cross; on Black Saturday, the Church meditates the repose of Jesus in the sepulcher. Finally, in the Paschal Vigil, the faithful relive the glory of the Resurrection.

Vespertine Mass in Cena Domini formally opens the Paschal Triduum. The Church of Jerusalem, in the fourth century, already started celebrating the commemorative Eucharist of the Last Supper and the institution of the sacrament of the Holy Sacrifice on the Cross:

In the beginning, this celebration was originally observed in Golgotha, in the Marytrium Basilica, at the foot of the Cross, which confirms the intimate relation of the Eucharistic celebration with the Holy Sacrifice on the Cross.

At the end of the fourth century, many Western churches adopted this tradition. However, it was not until the seventh century when the earliest Roman testimonies about the celebration were discovered.

Good Friday: Celebration of the Passion of our Lord

Good Friday commemorates the Passion and Death of Christ. Two documents from the third century (the Traditio Apostolica of Saint Hippolytus and the Didaskalia Apostolorum) give testimony to the common practice of the early Christians of fasting on the Friday and Saturday that precede the Paschal Vigil.

However, it was not until the fourth century, in Jerusalem, when the first liturgical celebrations of the Passion of our Lord were held: a whole day was allotted for prayer; a procession of the faithful was held from the Cenacle (the place where the column of the Flagellation is also venerated) to Golgotha, where the bishop presented the wooden Cross. In different stations during the procession, Passion narratives were read, along with other prayers and psalms.

The oldest testimonies that describe the liturgy on Good Friday in Rome date back to the seventh century. They point to two distinct traditions: the Gelasian Sacramentary (priest’s texts used for celebrating the Eucharist and Adoration of the Cross, Liturgy of the Word, and Presanctified Liturgy) and the Gregorian Sacramentary (Papal liturgy, limited to biblical readings and universal prayers).

In the early centuries of the Church, Black Saturday was observed as a whole day of absolute fasting as preparation for the Paschal feast. However, starting from the 16th century, with the anticipation of the Vigil on Saturday morning, the liturgical significance of the practice has been lost. Its original meaning was recovered with the help of the reforms done in the Church in modern times (20th century). Black Saturday should be a day of intense prayer for the faithful as they accompany Jesus in silence at the Holy Sepulcher.

The liturgical celebration of the Pasch of our Lord can be found in the very core of Christian worship. Since the time of the Apostles, the Christians weekly commemorated the Resurrection of our Lord through the Sunday Eucharistic Assembly.

Moreover, in the second century, the Church started celebrating a feast to serve as an actual remembrance of the Passover, although expressed through distinct traditions: one that commemorates the Passion (celebrated on the 14th day of Nissan, the Jewish lunar calendar) and that of the Resurrection (celebrated on the Sunday after the 14th of Nissan, day of the Resurrection of our Lord). The latter tradition had been practiced in the Church since the early third century.

The Easter Vigil, during the holy night when Christ rose from the dead, (Saint Augustine calls this the “Mother of all vigils”) closes the Holy Triduum and starts the Easter Season, celebrating the glory of the Resurrection of our Lord. This single event encloses the mystery of Christ the Savior and the saved Christian. Also during the ceremony of the Easter Vigil, thebaptism of catechumenates is held.

As indicated by Saint Augustine in his Sermons (220-221), the celebration of the Holy Vigil should be done during the night in such a way that it ends right before the early morning of Sunday.

The Paschal Vigil is the central point of the liturgical year in which all celebrations of the mysteries of the life of Christ converge.