The origins of Christmas Tree

“The tree in Saint Peter’s Square speaks of Christ, it wants to reflect his splendor and to say: Yes, he has come, and the trees of the wood acclaim him. The trees in the cities and in our homes should be something more than a festive custom: they point to the One who is the reason for our joy – the God who comes, the God who for our sake became a child. In the end, this song of praise, at the deepest level, speaks of him who is the very tree of new-found life. Through faith in him we receive life.” (Benedict XVI, Midnight Mass, 25 December 2008)

The Tree of Life, love and peace

A lot of the legends and traditions that refer to the Christmas tree date back to ancient times, but the historical data that affirm these have only been discovered these past few centuries.

It is certain though that these legends and traditions are fruit of the fusion of a lot of cultures accumulated through the centuries, both Christian and non-Christian ones.

We will consider in this essay some of the origins of the omnipresent tree that we see during Christmas. 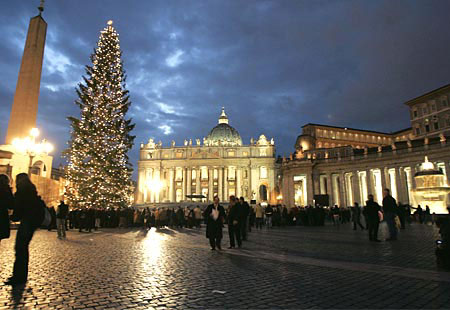 The story of the Christmas tree can be traced back to ancient civilizations. Ancient peoples had the custom of decorating their houses with evergreen trees and flowers, seeing in them a sense of magic and religiosity.

The Greeks and Romans decorated their houses with ivy. The Celts and Scandinavians adorned theirs with mistletoes and other evergreen plants (like the holly, butcher’s broom, laurel, and pine tree) because they believed that they offered magical medicinal benefits.

Among the Celts, the tree was considered sacred. Trees were adorned and venerated by the Druids of Central Europe whose main belief was that nature, among which were the trees, was where the spirits lived.

The feast of Frey, the god of the sun and fertility, was celebrated by decorating an evergreen on the days approaching the Christmas season.

The tree was named Idrasil (Tree of the Universe): in whose leaves were the heavens, Asgard (the abode of the gods) and the Valhalla (the palace of Odin) while in its roots was Helheim (the kingdom of the dead).

When Central and Northern Europe were evangelized, the early Christians of these towns christianized the tradition and instead celebrated the birth of Christ on those dates.

One very interesting and popular tradition – partly from history and partly from legend – in Germany affirmed that the Christmas tree originated in the 8th century.

Saint Boniface (675-754) was an English bishop who went to Germany (particularly to Hesse) to spread the Christian faith. After a difficult period of evangelization, but nonetheless with considerable fruit, Saint Boniface went to Rome for an audience with Pope Gregory II (715-731). 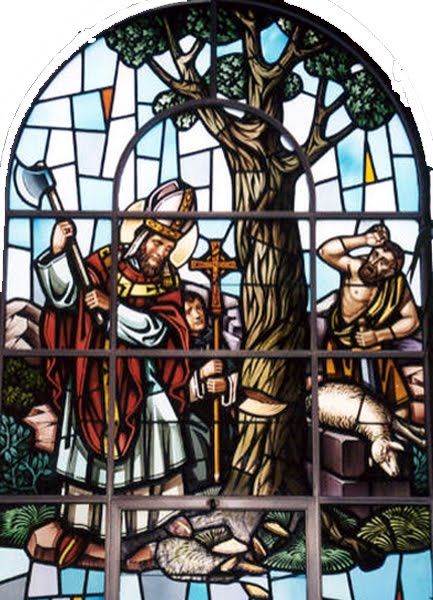 During his return to Germany in Christmas of 723, he felt personally offended on discovering that the Germans had reverted to their former pagan customs and were preparing for the Winter Solstice by sacrificing a young man under the oak tree of Odin.

Fired by holy anger, like that of Moses before the golden calf, Saint Boniface took up an axe and began to cut down the sacred oak. Until this very fact, all is historically documented.

The rest, however, can be attributed to legend: how, in his first attack at the tree, a mighty gust of wind brought down the whole tree. The people were dumbfounded and instantly recognized the hand of God in the phenomenon. In turn, they humbly asked Saint Boniface how they should celebrate Christmas.

Saint Boniface, the legend continues, noticed a small fir tree that miraculously survived the ruins. He saw it as a perennial symbol of the love of God. Next, he adorned it with apples (which symbolized temptation) and candles (which represented Christ who lights the world).

In line with the popular custom of decorating the houses with evergreen trees during winter, he asked the people to take with them a fir tree that, as he preached them, would symbolize peace, and immortality (represented by its green color) and heaven, the Kingdom of God (represented by its pointed structure).

Some religious plays during the Medieval times also offer some clues as to the origin of the Christmas tree. These plays incorporated some passages and mysteries of the Bible within its script and plot.

An example was the Tree of the Good and Evil in the Earthly Paradise. Its purpose was to teach religion to the parishioners, the majority of whom were illiterate.

In order to spread the faith and the Sacred Scripture, the teachings were essential, but not sufficient. Thus, theatrical plays were prepared to complement the catechesis and instantly became popular in all Europe. 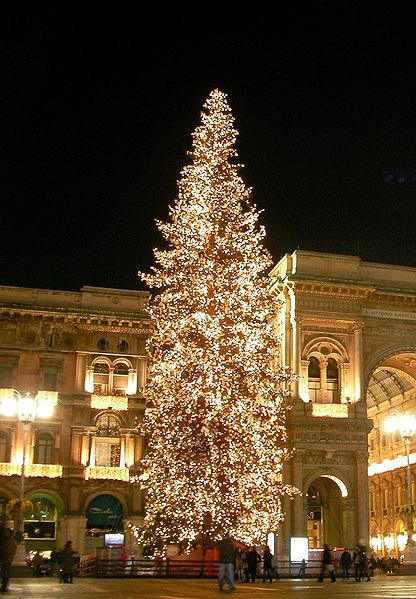 On Christmas Eve, the episode of the original sin of Adam and Eve was staged, in which at the center of the scene was the tree of the earthly paradise.

The tree could have been an apple tree, but it would not have been appropriate given the time of the season. Instead, a fir tree was used, on which some apples were hanged, wafers and biscuits were prepared in the form of Christmas symbols and sweets and gifts were given out to children.

The theatrical religious plays were soon phased out while the Tree of the earthly paradise continued to be associated with Christmas.

Recent origins of the Christmas tree

The popular consensus on the origin of the Christmas tree is that it was lifted from the tale of the tree of the earthly paradise. It was suggested that its origin can be located to the left shore of the Rhine (Alsace).

One of the early testimonies to this are the registries of the city of Schlettstadt (1521) in which special protection for the forests on the days before Christmas was established. Guards were sent to implement such law against those who cut trees and put them in their houses during Christmas.

Another document tells us that in Strasburg, the capital of Alsace, the fir trees were sold as house decorations in Christmas. From Alsace to all of Germany and its neighboring countries, this was made a Christian tradition during Christmas.

Symbolical meaning of the tree

Symbolisms have been attached to the meaning of the Christmas tree, both anthropological and mystical in nature.

The natural benefits of trees to men have given rise to different legends and have been associated with rituals and magic.

In different cultures, the tree represents the middle, the union between heaven and earth: its roots are planted deep in the ground and it raises up itself to the heavens.

Consequently, in some religions, especially those in the east, the tree symbolizes man’s encounter with the divine. Other meanings associated with the mystical nature of the tree include fecundity, growth, wisdom and longevity.

The Christmas tree represents, as was mentioned above, the tree of the earthly paradise whose fruits were eaten by Adam and Eve, thus leading to the fall of man. Likewise, it also represents Jesus Christ who has come as the promised Messiah and mediates man’s reconciliation. Further, it also represents the tree of life or the eternal life given its perennial leaves.

In the words of John Paul II: “The Christmas tree is an ancient tradition that exalts the value of life, for in the winter season the evergreen fir becomes a sign of undying life… The message of the Christmas tree is consequently that life stays “evergreen” if we make a gift of it: not so much of material things, but of life itself: in friendship and sincere affection, in fraternal help and forgiveness, in time shared and reciprocal listening.” (John Paul II, Audience, 19 December 2004). 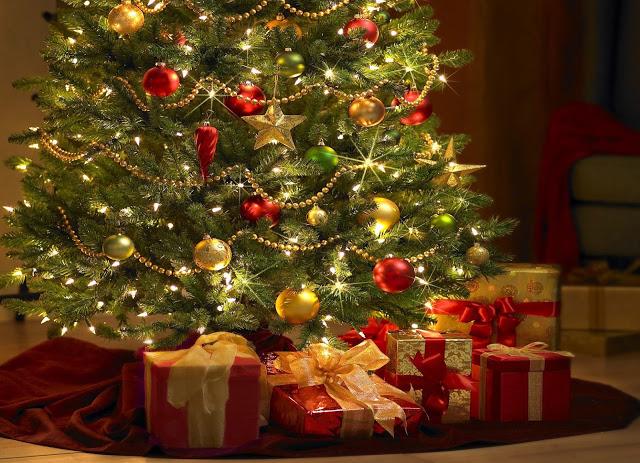 The triangular form of the tree symbolizes the Most Blessed Trinity.

The different prayers that are said during Advent are associated with the different colors of decorations observed during Christmas:

• blue, for the prayers of reconciliation;
• silver, for those of thanksgiving;
• gold, for those of adoration;
• red, for those of petition.
• These colors, along with the green of the tree itself, are probably the most traditional colors used in Christmas decorations.

The Christmas tree and the tradition of gift-giving tells us of all the good that comes from the tree of the Cross.

Thus, to put gifts under the Christmas tree has an essentially Christian meaning: “Next to the crib, as in St Peter’s Square, we find the traditional “Christmas tree”… Christmas gifts are usually placed on the tree or arranged at its base. The symbol thus also becomes eloquent in a typically Christian sense: it calls to mind the “tree of life” (cf. Gn 2: 9), a figure of Christ, God’s supreme gift to humanity.” (John Paul II, Idem.)

The most traditional decorations of the Christmas tree are:

• the star, set atop the tree, represents the faith that should guide the life of Christians, alluding to the star that guided the Three Kings towards Bethlehem.
• Originally inspired by the apples that Saint Boniface hanged on the tree to represent temptations, the balls hanged on the modern day Christmas tree represent the gifts of God to men.
• The ribbons as with tradition represent the union of families and loved ones that wrap each gift that is given during Christmas.
• The lights, as with the traditional Christmas candles, represent Christ as the light of the world.

“As we prepare to celebrate the Savior’s Birth joyfully in our families and our Ecclesial Communities, while a certain modern, consumerist culture tends to do away with the Christian symbols of the celebration of Christmas, may it be everyone’s task to grasp the value of the Christmas traditions that are part of the patrimony of our faith and our culture, in order to pass them on to the young generations. Let us remember in particular, as we look at the streets and squares of the cities decorated with dazzling lights, that these lights refer us to another light, invisible to the eyes but not to the heart. While we admire them, while we light the candles in churches or the illuminations of the crib and the Christmas tree in our homes, may our souls be open to the true spiritual light brought to all people of good will.” (Benedict XVI, 21 December 2005)